In the Upper Peninsula of Michigan on the shore of Lake Superior is the town of Munising and the Pictured Rocks National Park and Lakeshore. It is the setting place for the 20+ year old Michigan Ice Festival. I spent the weekend there to give a presentation and teach clinics. As I was born and raised in the state, it was a special event for me, and I felt welcomed as such. I was really impressed by the beauty of the landscape. It’s a hilly snow covered scene with the ever present expanse of the lake commanding attention. Due to the abundance and porousness of the sandstone cliffs and the northerly latitude and climate, there are literally ice climbs everywhere. People traveled from near and far, and all levels of experience and preparedness were represented, from people climbing in jeans and cotton hoodies to people carrying packs that looked loaded with gear for month long expeditions. 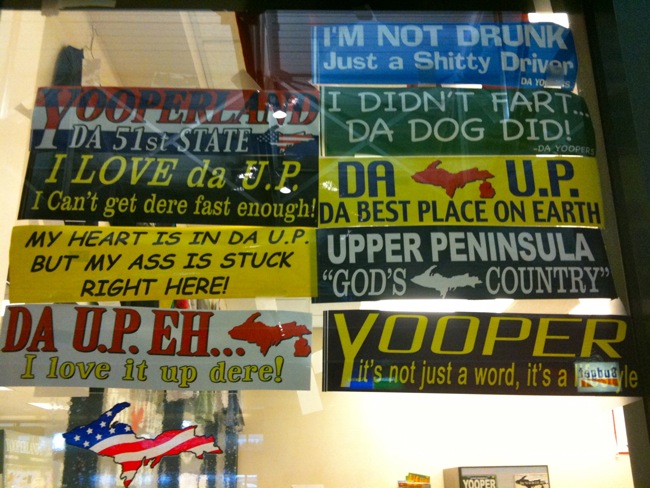 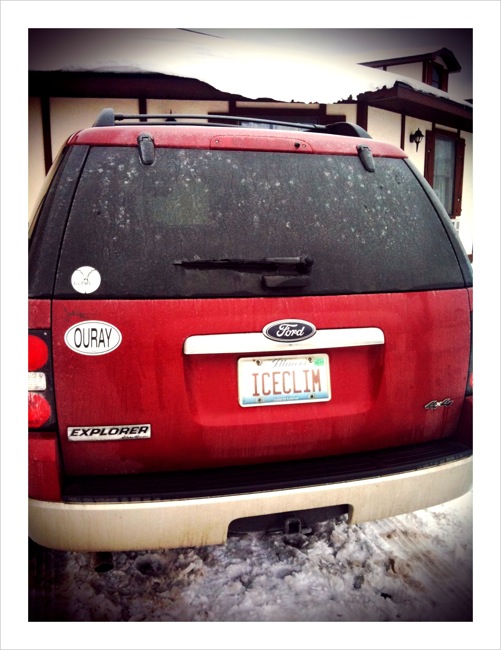 Packed crowd for the show 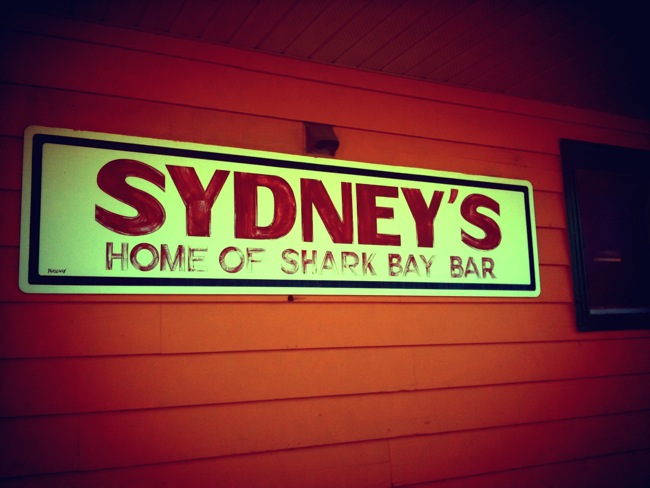 Home base for the Ice Fest 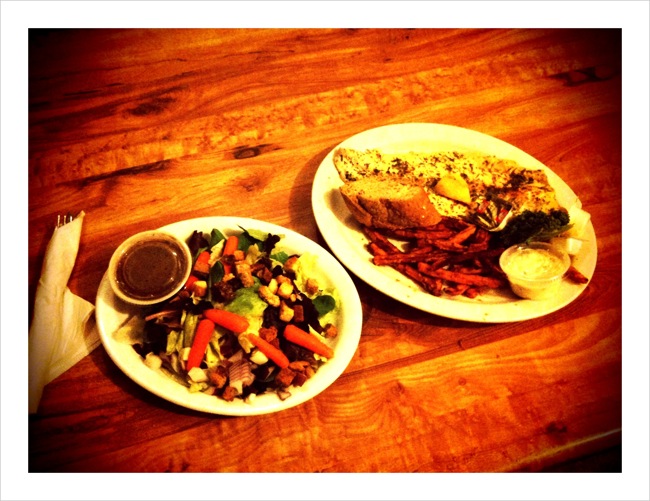 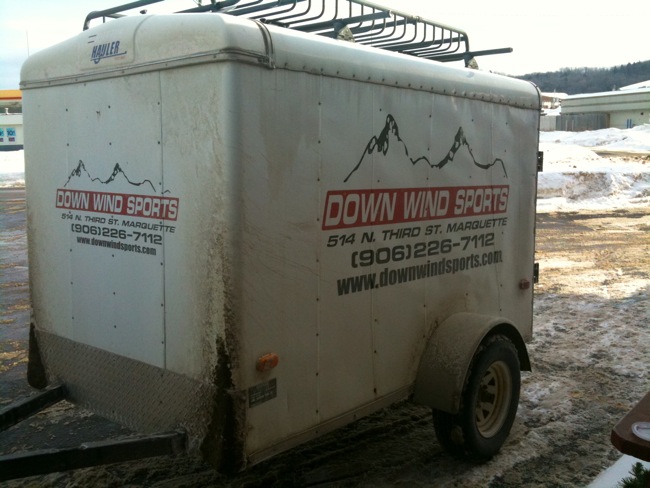 There was one person in particular that I will never forget. He was older and was alone, but obviously experienced as a climber. He had all of his own gear, and wore it comfortably as he did a constant smile. I was informed before we went out on Sunday that he had lung cancer, and might be slow on the approach. He arrived at the crag and his breath was foreign. It was mechanical and slow and deep. It sounded as though a breathing machine was inside of him. Throughout the course of the day, I observed him and spent some individual time with him. I watched him on the first climb, and he only went up about 10 feet before he got winded and the ‘machine breathing’ ensued. I thought to myself, “he’s just warming up.”

The same thing happened on his second climb. And then, on the third climb…Just 10 feet up, just a few moves, just a few moments. I went over to him as he was untying from the rope. He took his gloves off, and the sight of his wedding band allowed me a relief. I was happy to think that he was not alone; that he had someone who cared for him, someone that would be there when he got home. He said, “I have some , uhhhh, pulmonary issues,” and “I’ve started taking this new medicine that has really fucked my endurance.” I stood there for a moment just watching and listening. His breath slowly settled as he untied. He was looking down, and said with a simple honesty, it was almost contentment, “My days are done doing stuff like this.” I was caught off guard and confused, and it took me a moment to understand his words. It seemed like a long moment. Finally, I thought, “No. No way. He couldn’t…He didn’t just say that.” I had a strong and immediate emotional response, and fought hard to stay composed as tears welled up in my eyes. I thought, “You’ll get it next time.” He tried another time, and got less high and did less moves. I lowered him and went over. He said, “For this stuff, I’m used up.” He’s voice was so calm and his words were clear and candid. The realness of the situation weighed heavy on me. I didn’t say anything. I didn’t know what to say. I just stood there. He asked if I wanted to climb, and I did…I always do. I just responded by instinct. I tied in, and he belayed me up. As I climbed, he asked me detailed questions about my movements, about my tactics, about my swing, about my kicks… His genuine enthusiasm and desire to learn despite his condition affected me deeply. 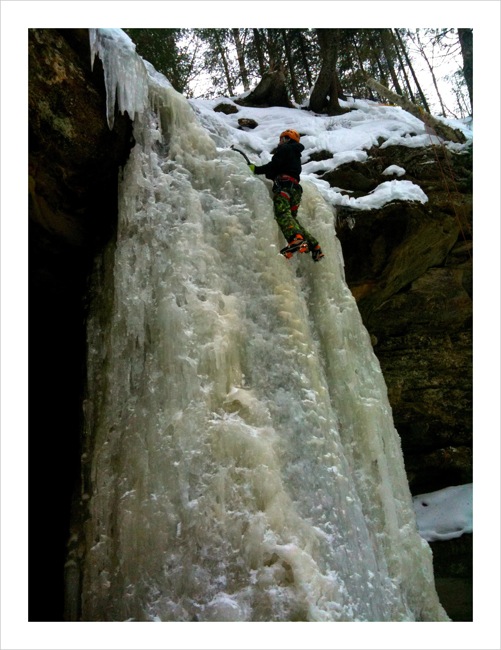 I came down and he was psyched to try again. As he prepared, he said, “I may only make it half way, but I’m gonna enjoy it immensely.” Again, it was so real. I truly believed him. There was no glamor, no superlatives for emphasis, nothing cool to be done, no personal ‘bests’ to be had. All that was there was a little bit of ice, and the courage to make a little bit of effort. It was the endpoint in a process of subtleties that seemed like the true gems of the experience for him; just getting to be outside and walk for a few moments in the woods, just getting to pack up the pack and carry it, just getting to lace up the boots, just getting to hold and swing the axes a few times, just getting to tie into the rope, just getting to try. These things, which most of us often overlook and take for granted on the way to something else, were really all that he had left. We would be wise to learn this lesson. On the last attempt, his feet didn’t even leave the ground, no joke. He just swung his his tools into the ice a few times. He tried to bring his foot up once, but set it down and then removed the tools from the ice. He looked back with a smile, and asked if we could get his camera out and take a picture of him “posing” with the ice. Maybe for his wife, maybe just for himself to remember. He said, “This may be the last time I get to do something like this.” He was not upset or sad. He seemed happy and comfortable. It was probably because, he didn’t come out that day to make it to the top of an icefall, only to tie into the rope, and stand beneath it, and look up at it and smile. Thank you for this lesson old man.