Today we decided to change matters up a bit. We went deep water soloing near the town of Olympos on the Mediterranean Sea. I was going to take a rest day, no climbing, just relaxing on the water in the sun…I didn’t even bring my climbing shoes. That lasted until the boats rounded a corner of the coast and the wall came into view. It was too good to pass. I have done a fair bit of DWS, and I would have regretted taking rest on this day. The wall was at the level of the water on the left and rose gradually to the right to about 30 meters…which is big for DWS. It is beautiful, high quality orange and white limestone. The 2 boats took one close pass down the length of the wall so that we could inspect, and then dropped everyone at the rocky beach to get situated, and warm up on the short part of the wall…James (no stranger to DWS) and I stayed on our boat and pointed at the biggest part of the wall to the old fisherman/driver. James elected to warm up on an easy, established, very obvious line. I had another idea. I had spotted a line out the tallest part of the wall that started in a cave, climbed a steep section to about 10 meters, and then embarked on tufa columns for another 15 or so meters…Upon our initial inspection, the height of the wall seemed of little concern to anyone. Perhaps it was because we knew that other people that climbed on the wall before, or perhaps it was because we didn’t have any frame of reference. It seemed a good-sized wall. However, it became painfully clear to the group as they observed my progression upward. In retrospect, it might have registered in my subconscious, but I ignored it. It felt like I was on the wall for so long. I kept looking down and it kept looking the same. I kept thinking, “I’d jump from here,” or “I’ve fallen from this high before.” After a few times though, I knew that I was just tricking myself. From other DWS excursions, I know that it is difficult to tell the height looking downward. 70 ft can look like 40 ft, 100 ft can look like 60 ft…it is just a big blue carpet down there. Again, it registered in my subconscious, but I just tried to concentrate on the line and finding my way upward…and that my shoes were 2 size’s to big (borrowed from Boone), and that I didn’t take any chalk and my hands were basically wet from sweating (stupid move), and to try not to break any hand or foot holds…It was electric. I was fully engaged. I eventually finished my quest up the line of least resistance, much to the relief of the crew. It was amazing. I rested for a while, and let the energy mellow. I thought that would be good for my “rest” day, and that I would just chill on the rocks in the sun…but I made the mistake of getting in the boat again. I spotted a variation of the first route that I did that went left at about 10 meters. So again, I quested, this time with chalk. See the outcome here 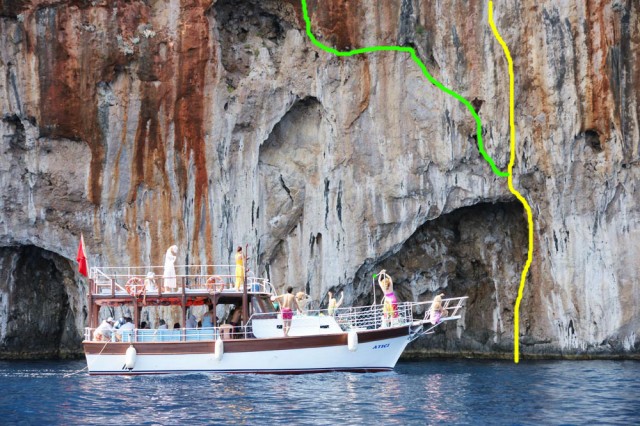 A tourist boat and the bottom part of the wall. Route 1 in yellow, route 2 in green